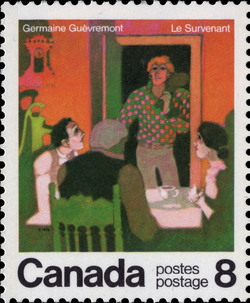 Germaine Guèvremont, née Grignon, was born in the Laurentian town of St-Jérôme at the turn of the century, into a family with an established literary reputation. Her father, a lawyer whose pastime was extolling his beloved mountainous countryside in prose and verse, was named protonotary at Ste-Scholastique shortly after Germaine's birth, and there she spent her childhood. It was not until after she had married Hyacinthe Guèvremont and gone to live with him in Sorel, that she came to know and love the flat meadows and wide stretches of river she was to recreate so vividly in her writings. Some years before Germaine's marriage, a young reporter from the "Montreal Star", a native of Norway who had completed his education in China, made several visits to Ste-Scholastique, where he created quite an impression on the villagers and eventually married Germaine's older sister. It was this "outlander" brother-in-law who, years later, influenced Mme Guèvremont to take up writing as a distraction after the death of a young daughter. She began her career as Sorel correspondent for the "Montreal Gazette" and reporter for "Le Courrier de Sorel". In 1935 the Guèvremont family moved to Montreal. Germaine became part of an active literary coterie, and was asked to write a series of sketches with a rural background for the revue "Paysana", a task which effectively completed her transformation from reporter to novelist. Her second book, "Le Survenant", 1945, was an immensely popular success in Quebec, winning the Prix Duvernay. When it appeared in France, and later in the United States and Great Britain translated with its sequel "Marie-Didace" as "The Outlander", the author's international reputation was established. She subsequently won the Governor General's Award for fiction in 1950. The story begins one autumn evening at Chenal du Moine, just as the Beauchemin family sat down to supper. A stranger, a robust young man with a pack on his back, appears at the door, asking for something to eat. Thus the "Survenant" (outlander) arrives unheralded, and lives for a time among the Beauchemin and their friends and neighbours. When he goes away again, as suddenly as he came, he leaves them changed forever. Antoine Dumas' painting for the stamp honouring Germaine Guèvremont depicts the opening scene in "Le Survenant". Mr. Dumas is a native of Quebec City where he now heads the Graphic Communications Program at the University of Laval.