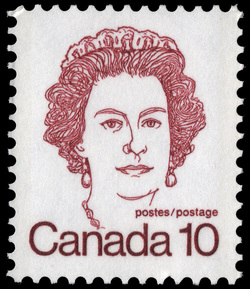 The portrait of Queen Elizabeth II first appeared on a Canadian postage stamp in May 1935 on one of six stamps issued to commemorate the Silver Jubilee of King George V. She was then Her Royal Highness Princess Elizabeth, daughter of the Duke and Duchess of York, and few people at that time foresaw that she would one day succeed to the throne. Pages of history were written before Princess Elizabeth's portrait again appeared on a Canadian stamp. In January 1936, King George V died and the Prince of Wales ascended the throne to become King Edward VIII. In December 1936 he abdicated to marry Wallis Simpson, and his brother, the Duke of York, Elizabeth's father, became King George VI. In 1939, Canada was the first Commonwealth nation to welcome the new King and Queen in person. A set of three stamps was issued to commemorate the Royal Visit. These features King George VI and Queen Elizabeth, Princess Elizabeth and Princess Margaret Rose, and the National War Memorial in Ottawa. Not until February 1948 did another Canadian stamp honour Princess Elizabeth. It was issued to commemorate her wedding in November 1947 to Lieutenant Philip Mountbatten of the Royal Navy. The young couple, Princess Elizabeth and Prince Philip, visited Canada in 1951 and a stamp was issued for this occasion. As it happened, this was the last Canadian commemorative stamp of the reign of King George VI. On February 6, 1952, King George died in his sleep and Princess Elizabeth ascended the throne. The coronation of the new Queen took place on June 2, 1953. Canada commemorated the coronation with a stamp featuring a medallion sculpture portrait of Her Majesty. During the years of her reign, Queen Elizabeth and Prince Philip have made numerous official visits to Canada. On these occasions, Canada usually issued a "Royal Visit" commemorative stamp. The 1957 stamp marked the Queen's visit to open Canada's 23rd Parliament, the first time that a sovereign had done so. In 1959, a stamp marked their coast-to-coast Royal Tour beginning with the opening of the St. Lawrence Seaway. The 1964 stamp was in honour of the Queen's visit to Charlottetown and Quebec City commemorating the 1864 conferences which led to the passing of the British North America Act. In 1967, a stamp marked the Queen's visit to participate in our Centennial celebrations and Expo '67. The 1973 Royal Visit stamp commemorated the Queen's attendance at the Commonwealth Heads of Government Meeting in Ottawa. Traditionally, the reigning Monarch is also portrayed on regular issue postage stamps. Queen Elizabeth II first appeared on a set of Canadian definitive stamps in 1953. A set bearing a new portrait of Her Majesty was introduced in 1954. This set continued in use until 1962-63 when a new series featuring a cameo-like profile of the Queen with Canadian symbols in the upper left corner of the stamp was issued. In 1967, this set was replaced with a Centennial issue featuring a portrait of the Queen on the right and scenes of Canada on the left of each stamp. In 1973, a new set of definitives was introduced portraying Queen Elizabeth on the eight-cent denominations and former Prime Ministers on the lower denominations. On September 1, 1976, a ten-cent definitive will be issued bearing the portrait of Queen Elizabeth II currently in use on the eight-cent stamp. The portrait, a pen and ink line drawing, is the work of Ontario artist David Annesley.