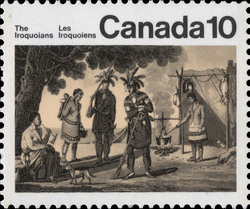 The Iroquoians, including the Mohawks, Oneidas, Onondagas, Cayugas, Senecas, Eries, Neutrals, Tobaccos and Hurons, spoke dialects of the same language family. Early in the seventeenth century, these Indians occupied southern Ontario and western New York, a region they called "The Old Island, the World on the Turtle's Back." There is some debate about the length of their sojourn in the area. One theory holds that they arrived comparatively recently. A new theory suggests that they had lived there for thousands of years. The militarily powerful Iroquoians were adept at politics and diplomacy and skilfully played English and French colonizers against each other. The Iroquoians constructed semi-permanent villages, each usually on high ground and with a wooden palisade. The villages contained three hundred to four hundred families inhabiting fifty to one hundred longhouses - frameworks of poles covered with bark. An old woman rules each longhouse, which accommodated several families related on the female side. Outside the towns were huge fields torturously won from the forest. The women cultivated tobacco, pumpkins, beans and squash, although corn, of which the Iroquoians had approximately fifteen varieties, was the major crop. The Senecas alone raised as much as a million bushels a year. Luckily, the Indians had over forty recipes for corn and could also add spice to their diet with fried grasshoppers and other delicacies. The Iroquoians gathered more than one hundred kinds of wild plant food and made two dozen different beverages. Fishing and hunting were very important, but since large animals could not survive in the vicinity of a town, men spent the late fall and early winter killing game in distant hunting grounds. Agriculture forced villages to move every ten years or so, because the soil became exhausted and because the forest was pushed back so far that collecting wood became quite laborious. A devout people, the Iroquoians believed that numerous spirits dwelled in the countryside. There were seasonal religious festivals associated with the running of maple sap, the ripening of strawberries and similar events. At the mid-winter festival people burned tobacco to request the return of growing things. Every few years the Indians held a Feast of the Dead, burying in a pit those who had died since the last Feast, so that they could travel to the next world together. Elaborate rituals and dancing to the accompaniment of musical instruments (the Iroquoians had fifteen or sixteen) were an integral part of religion. The Indians looked "to their dreams for guidance in all the important affairs of life" and felt that a mind subconsciously wanting something could cause sickness by vexing the body until the required thing was provided. Ray Webber photographed the artifacts which are, from left to right, a corn husk mask, a turtle shell rattle, a false face mask, an earthenware vessel and a ball club. The Royal Ontario Museum and the National Museum of Man provided the artifacts. The Way of Life stamp features an aquatint of an Iroquoian encampment by George Heriot. The print is taken from his book Travels in the Canadas. Lewis Parker made a watercolour drawing of the ceremonial costume of the Iroquois for the dress stamp. Georges Beaupré designed the graphic symbolism stamp which features an Iroquoian version of the thunderbird. Mr. Beaupré did the typography for the entire Indian series.

Based on a drawing by George Heriot. Designed by Georges Beaupré.

George Heriot, "Costume of Domiciliated Indians of North America" , circa 1807