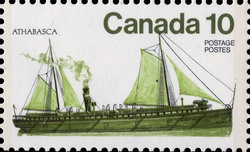 The Inland Vessels stamps feature Canadian passenger steamers and a riverboat. The Canadian Pacific Railway entered the Upper Great Lakes shipping business with three steel sister ships, the Alberta, Algoma and Athabasca. Built in Scotland, they steamed to Montreal in 1883 and were sliced in half to fit the lock system. Reassembled at Buffalo, they arrived at Owen Sound in May 1884 ready for the Lakehead run. They were the first lakers to be equipped with electric lights, and were so well constructed that people believed "twenty feet could have been ripped off the bow of the boats without endangering their seaworthiness." Besides normal passenger traffic, they transported troops returning from the 1885 Riel Rebellion and carried grain. In November of that same year, Algoma ran into Isle Royale and broke up, but the other two served for many years. Athabasca, for example, was lengthened from 270 to 299 feet in 1910 and was only scrapped after World War II. Tom Bjarnason's designs for this stamp have captured the elegance and gracefulness of these 19th century passenger vessels. They have a sense of aliveness and presence while preserving a visual continuity with the 1975 set of Coastal Ships stamps. The stamp were printed by a combination of one-colour steel engraving and nine-colour lithography, a method which renders faithfully the delicate line work and bright colour characteristics of Mr. Bjarnason's drawings, as well as showing the interesting detail of the ships' hulls and rigging.