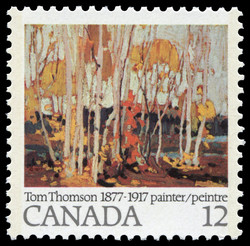 The hidden date for this stamp can be found in the bottom-left corner of the painting. Tom Thomson helped bring new vision and understanding to Canadian landscape painting. His work is yet another manifestation of the strength and originality of Canadian culture. Thomas John Thomson was born on 4 August 1877 at Claremont, Ontario, but grew up on a farm near Leith, Ontario. His knowledgeable, well-read parents appreciated the finer things in life, such as good books, music and good company. Consequently, Thomson became interested in art, music and nature at an early age. After working briefly as a machinist's apprentice and attending business college, he wandered to Winnipeg and thence, in 1901, to Seattle where he got his start in commercial art. He pursued this career in Toronto where he moved reportedly because of an unhappy love affair. As senior artist in one Toronto firm, Thomson earned $11 a week. He often sketched in his spare time and even took a few formal art lessons. After shifting from company to company, he finally got a job with Grip Limited where he met four members of what later became known as the Group of Seven. Thomson began to paint seriously in the autumn of 1911 an soon afterward visited Algonquin Park for the first time. In 1913 his first large canvas, "Northern Lake", won a prize at an exhibit sponsored by the Ontario Society of Artists. This success and encouragement from friends gave Thomson the impetus to become a full-time artist. During this period, he also shared a studio with A. Y. Jackson, from whom he learned many painting techniques. From 1914 until he died, Thomson spent a large part of each year at Algonquin Park. He was an expert woodsman and canoeist, and when money ran low, he earned extra cash as a tourist guide or a fire ranger. Although initially there was some suspicion at the park that he was a poacher, this doubt soon disappeared. Thomson achieved his best work in this period, though not everyone lauded his creations. One critic dubbed the new style of painting "The Hot Mush School", and another stated : "Among those who have made the most daring departure from representing nature as it appears to ordinary mortals are A. Y. Jackson and Tom Thomson." Indeed, as is often the case in Canada, Thomson achieved national recognition only after his mysterious death in 1917 and after his work had been acclaimed abroad. Most of Thomson's artistic output was in the form of sketches done directly from nature on birch panels which fitted conveniently into his sketch box. Two such paintings, similar in subject yet widely different in content and mood, are featured on these stamps. "Autumn Birches" contrasts the glowing golds and reds of fall foliage against a chill and misty sky presaging winter. This sketch, also in oil on an 8 ½" x 10 1/2" panel, is reproduced with permission of the Art Gallery of Ontario in Toronto.