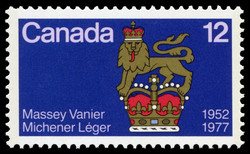 The hidden date for this stamp can be found within the crown. In 1977 Canada celebrates not only the tenth anniversary of the Order of Canada but also the twenty-fifth anniversary of the first Canadian-born governor general in the modern era. The Post Office will observe these historical landmarks. With the founding of Quebec in 1608, the powers and prerogatives of the Crown in Canada, first under the French regime, then the British, and finally as an independent country, have been exercised by a succession of governors and governors general who represented the sovereign. In 1952 Vincent Massey was appointed the first Canadian-born governor general since the Marquis de Vaudreuil, Governor of New France from 1755 to 1760. Citizens of the United Kingdom served in the interim. Some people feared that Massey's appointment threatened the monarchy, but most felt that the action reinforced the Canadian character of the Crown and demonstrated its adaptability as an institution. The present governor general, the Right Honourable Jules Léger, is the fourth Canadian to hold the post. The governor general exercises "on the advice of his Canadian ministers, all Her Majesty's powers and authorities in respect of Canada." As the Queen's personal representative, the governor general must make sure there is always a government and must perform numerous other constitutional duties. In dealing with government, he has "the right to be consulted; the right to encourage and the right to warn." The governor general has a broad social role which obliges him to receive thousands of Canadians at Government House and to travel extensively throughout the country to meet people in their communities, promote national unity and encourage Canadians in understanding each other better. Governors general have traditionally enjoyed great latitude to develop interest in areas where they have special concerns. For example, the Stanley Cup for hockey and the Grey Cup for football were donated by the governors general bearing those names. Governors general were responsible for the founding of the Royal Society of Canada and the National Gallery. Among the Canadian-born governors general, Mr. Massey is remembered for his contributions to the arts, General Vanier for his support of efforts to foster understanding and improvement of family life and Mr. Michener for making Canadians more aware of the need for physical fitness. The Canadian Governors General stamp was designed by Anthony Hobbs of Montreal. Mr. Hobbs' design for the Governors General stamp presents a graphic rendition of the crown and lion taken from the governor general's standard on a deep blue background and features the names of the four Canadian governors general. Mr. Hobbs' design has captured the dignity, tradition and meaning of the office of governor general.