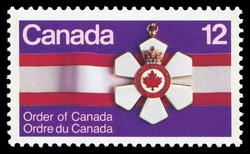 The hidden date for this stamp can be found near the badge. In 1977 Canada celebrates not only the tenth anniversary of the Order of Canada but also the twenty-fifth anniversary of the first Canadian-born governor general in the modern era. The Post Office will observe these historical landmarks. Because "The Crown is the fount of all honours," the governor general administers a comprehensive system of Canadian honours including the Canadian Bravery Decorations, the Order of Military Merit and the Order Canada. The latter was instituted on 1 July 1967. The Queen is Sovereign of the Order while the governor general is Chancellor and Principal Companion. There are three levels of membership. Companions of the Order have shown "outstanding achievement and merit of the highest degree, especially service to Canada or to humanity at large." Officers of the Order have demonstrated "achievement and merit of a high degree." Ordinary Members of the Order have given "distinguished service in or to a particular locality, group or field of activity." Only Canadians can be elevated to the Order though foreigners can receive an honorary appointment. Anyone can nominate a person for appointment to the Order but the qualifications are rigorous. Since 1967 only about 1,000 people have satisfied the requirements. Each individual reflects the spirit of the Order's motto, "Desiderantes Meliorem Patriam", "they desire a better country." The badge of the Order, designed by Mr. Bruce Beatty, was based on a version of the snowflake. The colours of the ribbon are the red and white of the Canadian flag. The Order of Canada stamp was designed by Anthony Hobbs of Montreal. The Order of Canada stamp is based on a photograph of the badge of the highest level of the Order of Canada, the Companion. Shown in the background against a regal purple is the ribbon of the Order. Mr. Hobbs' design has captured the dignity, tradition and meaning of the Order of Canada.

Designed by Anthony Hobbs Based on a medal by Bruce Beatty