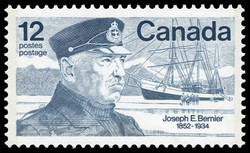 The date on this stamp is hidden on the ship.

Mankind will always need the inspiration of heroes from the past. The Post Office remembers one such man of renown, Captain Joseph-E1zéar Bernier, by issuing a stamp in his honour. Joseph-Elzéar Bernier was born in 1852 to a nautical family. At age 12 he started work as a shipbuilder and soon went to sea. His father, the captain, believed that once a boy had reached the outer limits of nausea, he would never be seasick again. When the first storm of the voyage arose, young Bernier "was lashed to the windlass on top of the fo'c'sle, where (he) would feel the full effect of the pitching and rolling of the vessel." Released two hours later, he had to finish his duties before collapsing in his bunk. Bernier, however, was not only tough, but also smart, and at age seventeen, he himself became a captain. During a varied career that makes the adventures of Davy Crockett seem dull, Bernier cultivated his growing fascination with the Arctic and stimulated national awareness of the area. As commander of several expeditions aboard the CGS Arctic, he claimed islands and established police posts, thereby strengthening Canadian sovereignty in the wild north. The Bernier stamp was designed by Will Davies of Toronto. Mr. Davies' design features a portrait of Captain Bernier in setting which relate to significant event in his life. The Bernier stamp shows the CGS Arctic caught in the ice during one of Captain Bernier's arctic expeditions. The design was interpreted in steel engraving by Robert Couture from Mr. Davies' original line and wash drawing.