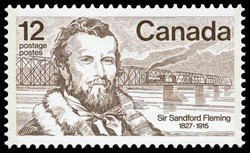 The hidden date of this stamp is on Sir Sandford Flemming. Mankind will always need the inspiration of heroes from the past. The Post Office remembers one such man of renown, Sir Sandford Fleming, by issuing a stamp in his honour. Sandford Fleming was born in 1827 in Scotland, where he trained as an engineer. He sailed for Canada in 1845. The weather was so tempestuous that, despairing for his life, he wrote a final message and threw it overboard in a bottle. Fleming survived, only to be informed that Canada had no work for young engineers. Nevertheless, he did find employment and even helped rescue Queen Victoria's portrait from being burned by rioters. About this time he designed Canada's first stamp, the three Penny Beaver. Appointed to find a route for the Intercolonial Railway, he set out in the winter of 1864, only to find out that someone had supplied his surveyors with canned meat of Crimean War vintage, forcing them to live off the land. In later years, Fleming worked on the CPR, invented a system of standard time, and promoted the Pacific cable. To further the latter venture, he plotted to take over a Pacific island for one of the cable stations. This reflected his dedication to the British Empire, which he regarded as "a union of free and enlightened communities..." The Fleming stamp was designed by Will Davies of Toronto. Mr. Davies' design features a portrait of Sir Sandford Fleming in setting which relate to significant event in his life. The Fleming stamp features a train crossing one of the steel bridges on the Intercolonial Railway designed and surveyed by Sir Sandford Fleming. The design was interpreted in steel engraving by Robert Couture from Mr. Davies' original line and wash drawing.

Designed by Will Davies. Based on a photograph by William James Topley.