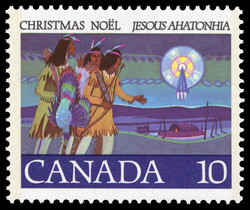 Soon after disease and warfare decimated the Huron nation, a few of the half-starved survivors straggled into Quebec, bringing with them word of Canada's first Christmas carol. Father Jean de Brébeuf, S.J., a missionary, composed the carol sometime around 1641. Brébeuf arrived in New France in 1625, hoping to bring salvation to the Indians. After roving with the Montagnais for five wintery months, he departed for the Georgian Bay and Lake Simcoe region, home of the Huron Confederacy. His work was difficult. Only complex political negotiations convinced the Hurons to take him on the gruelling voyage to their country. Later, when plagues ravaged the natives, some threatened to kill Brébeuf and his colleagues, suspecting that they had created the diseases through witchcraft. The Iroquois, hereditary enemies of the Hurons, captured Brébeuf in 1649 and put him to death. The new-found faith of the converts no doubt consoled Brébeuf throughout these trials. In 1642, he noted with pleasure that "The Indians have a particular devotion for the night that was enlightened by the birth of the Son of God. Even those who were at a distance of more than two days' journey met at a given place to sing hymns in honour of the new-born Child". One of these hymns was Brébeuf's own "Jesous Ahatonhia". Mr. J. E. Middleton's interpretation of the carol is reproduced below. 'Twas in the moon of winter time when all the birds had fled, that Mighty Gitchi Manitou sent angel choirs instead. Before their light the stars grew dim, And wand'ring hunters heard the hymn: "Jesus, your King, is born; Jesus is born; In Excelsis Gloria!" Within a lodge of broken bark the tender Babe was found. A ragged robe of rabbit skin enwrapped His beauty'round. And as the hunter braves drew nigh, the angel song rang loud and high: "Jesus, your King," etc. The earliest moon of winter time is not so round and fair as was the ring of glory on the helpless Infant there. While Chiefs from far before Him knelt, with gifts of fox and beaver pelt. "Jesus, your King," etc. O children of the forest free, O sons of Manitou, The Holy Child of earth and heav'n is born today for you. Come, kneel before the radiant Boy who brings you beauty, peace and joy. "Jesus, your King," etc." Ronald G. White, artist and illustrator of children's books, has use North American Indian motifs to create a fanciful and reverent setting for the Nativity story. On the 10¢ stamp, the three hunter braves follow the star to the lodge where the Infant is found. This illustration was painted in gouache by Mr. White, typography is by Yon van Berkom.

Designed by Yon van Berkom Based on a painting by Ronald G. White