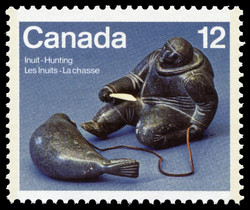 Few would flee the comfortable South for the severe Arctic, to hunt for a living using methods portrayed by these stamps. The Inuit, however, either mastered the techniques or starved. Food preferences and hunting systems varied greatly in the vast polar sweep from Alaska to Greenland. Seals or caribou were mainstays of the human diet and were sometimes supplemented by whales, walruses, fish, bears and birds. Lacking fresh fruit, the Inuit obtained vitamin C (which cooking destroys) by eating raw meat. Indeed, the word "Eskimo" is an Algonkian term for "raw meat eater". Scurvy often killed early European explorers who were squeamish about uncooked meat. Before dining, nevertheless, prudent individuals let the meat freeze to a temperature far below zero degrees Fahrenheit. This reduced the danger of acquiring a deadly dose of trichinosis, especially from bear or walrus flesh infested with the trichina worm. A repast of rare bear finished off all but three members of the Jens Munk expedition to Hudson Bay in 1619-20. The season determined the proper way to seal. In winter, dogs sniffed out snow-covered breathing holes in the ice. The hunter, sometimes in minus sixty degree weather, then lurked near the hole and harpooned the seal as it came up for air. To avoid warning the quarry, it was essential to remain quiet and to leave unaltered the light pattern reaching the hole. A line tied to the detachable harpoon head prevented the wounded seal from escaping, but if the line became tangled around a hand, an exceptionally powerful beast could rip off a man' fingers or pull him into the water. In summer, the hunter pursued seals by kayak, or stalked them as they basked on the ice. Since the seals awoke every thirty seconds, the hunter either hid behind a white screen or pretended to be a seal until his victim dozed off again. The Inuit stamps were designed by Reinhard Derreth of Vancouver, and feature various methods of hunting employed by the Inuit as depicted in their prints and sculptures. This stamp depicts seal-hunting in an anonymous Inuit soapstone sculpture. The sculpture is from the collection of the Vancouver Art Gallery. These vigorous graphic and sculptural portrayals of historic hunting methods have in their imagery the strength and conviction that comes from personal experience and knowledge of the importance of hunting in the daily life of the Inuit.