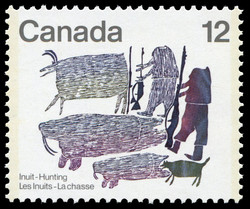 Few would flee the comfortable South for the severe Arctic, to hunt for a living using methods portrayed by these stamps. The Inuit, however, either mastered the techniques or starved. Food preferences and hunting systems varied greatly in the vast polar sweep from Alaska to Greenland. Seals or caribou were mainstays of the human diet and were sometimes supplemented by whales, walruses, fish, bears and birds. Lacking fresh fruit, the Inuit obtained vitamin C (which cooking destroys) by eating raw meat. Indeed, the word "Eskimo" is an Algonkian term for "raw meat eater". Scurvy often killed early European explorers who were squeamish about uncooked meat. Before dining, nevertheless, prudent individuals let the meat freeze to a temperature far below zero degrees Fahrenheit. This reduced the danger of acquiring a deadly dose of trichinosis, especially from bear or walrus flesh infested with the trichina worm. A repast of rare bear finished off all but three members of the Jens Munk expedition to Hudson Bay in 1619-20. The Inuit were continually plotting against the caribou, spearing them as they crossed rivers, driving them into pounds, and digging pits in the snow for them. Sometimes two men, having sighted caribou, would conspicuously walk away. One kept going while the other hid. When the curious animals investigated the decoy, the concealed partner riddled them with arrows. Some Inuit groups, to make good providers of newborn boys, would wipe them with the skin from a caribou bull's forehead. The real challenge was the quest for the polar bear, a creature powerful enough to swat a one hundred-pound dog twenty feet into the air. Dogs cornered the prey allowing their masters to dispatch it with spears or arrows. Occasionally someone would anchor the blunt end of his harpoon in the ground. When the enraged behemoth charged, it impaled itself on the sharp end - a very accommodating gesture! The Inuit welcomed the rifle with enthusiasm. The Inuit stamps were designed by Reinhard Derreth of Vancouver, and feature various methods of hunting employed by the Inuit as depicted in their prints and sculptures. This stamp depict a stonecut print: a walrus hunt, by Parr. The stonecut print is from the collection of the Vancouver Art Gallery. These vigorous graphic and sculptural portrayals of historic hunting methods have in their imagery the strength and conviction that comes from personal experience and knowledge of the importance of hunting in the daily life of the Inuit.

Based on a stonecut print by Parr Designed by Reinhard Derreth