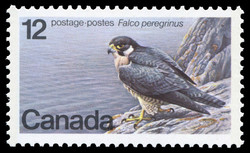 If the environment is too polluted for the peregrine falcon, perhaps humanity itself will one day succumb. The new endangered wildlife issue thus conveys a sombre warning. The peregrine falcon, or "duck hawk", inhabits all but the remotest or harshest places on earth. Three races are found in Canada - one on the British Columbia coast, one in the far North, and a third in other areas. The effects of DDT and other insecticides have stricken the once indestructible peregrine and other raptors such as the bald eagle, the osprey and Cooper's hawk. With every meal they absorb small quantities of chemicals which become concentrated in the body to such an extent that the buildup of noxious substances eventually either kills the birds or disrupts reproduction. Conservationists and environmentalists are concerned that seemingly innocuous chemicals now entering the environment could eventually destroy mankind. Though the loss of any species is a pity, the disappearance of the peregrine falcon would be especially tragic. Among the fastest of all birds, it can dive at approximately 200 miles an hour. Speed, as well as a superb hunting technique and incredible eyesight, endeared the birds to falconers for thousands of years and helped publicize Canada's arctic islands during medieval times. Marco Polo wrote that the Arctic Ocean contained "certain islands in which are produced numbers of gyrfalcons and peregrine falcons which are carried in many directions." The crow-sized adult peregrine is 15 to 21 inches long, weighs 1 1/4 to 2 pounds, and has a 38 to 46-inch wingspread. The female, called the "falcon", is larger than the male, or "tierce". Both prefer to eat pigeon, though they will dine on anything from mallard ducks to warblers. Fondness for pigeons rendered the peregrine falcon unpopular during World War II forcing the British to destroy local peregrines to protect pigeons carrying secret messages. The passenger pigeon's demise probably hurt the falcon in North America; however it survived, but only to fall victim to chemical poisoning. Robert Bateman, the illustrator of this stamp, is an accomplished wildlife artist who lives in Ontario and travels the world to research the habits and habitats of the wild creatures that appear in his paintings.