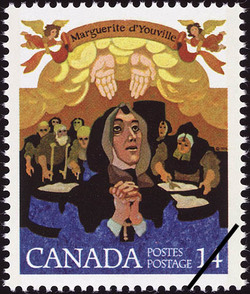 "The strong woman of Canada". "A woman of genius", are among the tributes that have been paid to Mère d'Youville, foundress of the Grey Nuns religious order. Noted for her resourcefulness and astute business sense, Mère d'Youville developed and managed her community with an expertise that was the envy of her male contemporaries. Even more outstanding were her piety and devotion to the poor - virtues which became her strength in the face of the hardship and adversity that were to mark her life. It was not a future one would have predicted for Marie Marguerite Dufrost de Lajemmerais when she was born into one of the best families of New France on October 15, 1701, at Varennes. However, the childhood of poverty she endured after her father's death was followed by a short and ill-fated marriage to a neglectful spendthrift who trafficked in contraband furs and alcohol When François d'Youville died, Marguerite and her two sons were left debt-ridden and in social disgrace. The trials of those early years led the already pious Marguerite to seek solace in religion and good works, and in 1737 she founded a small community of companions to minister to the poor and sick of the colony. Not long after, the little band became the centre of controversy when, because of her proven administrative abilities, Marguerite was chosen to restore Montreal's foundering general hospital. Opponents to the restoration plan sought to discredit Marguerite and her group by accusing them of all sorts of degenerate activities, including personal drunkenness. They were nicknamed "les soeurs grises", a pun on the word, which can mean either grey or drunk. (The sisters eventually dignified this once-unfortunate title by adopting grey habits, and so became respectably known as the Grey Nuns.) After nine years of public harassment and personal hardship, Marguerite was finally appointed administrator of the hospital, which by then was financially ruined. The sisters' fund-raising efforts, which involved sewing for the military and merchant class, and making candles and hosts for the church, blossomed into a thriving commercial enterprise. They managed a bakery, a brewery, a farm. They rolled tobacco, fabricated and sold building products, organized excursions for the public. They expanded the hospital, built a church, and in 1761, founded a home for abandoned children- the first in America. During the next two centuries, Mère d'Youville's followers went further afield to continue the good works of their foundress. Today the Grey Nuns have communities in Ontario, Manitoba, Alberta, the Northwest Territories, Pennsylvania and Massachusetts, as well as in Quebec. Mère d'Youville died from a stroke in her 70th year. Because of extraordinary accomplishments ascribed to her and the exceptionally holy life she led, she was "beautified" by Pope John XXIII in 1959, the next step before sainthood. This commemorative stamp illustrates an incident from Marguerite d'Youville's life. During the general famine which preceded the fall of Montreal in 1760, the mysterious appearance of unobtainable food supplies in the sisters' refectory was attributed by them to their foundress' unwavering faith in divine providence. The spirit of the era is admirably conveyed by Antoine Dumas, Quebec artist, in this painting, using a contemporary interpretation of the baroque style. Mr. Dumas is a professor with the Graphic Communications Program at the University of Laval in Quebec.