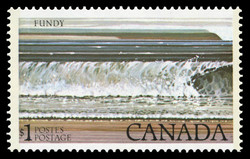 The hidden date for this stamp can be found along the left edge of the stamp near the base of the wave. Fundy National Park is part of the Appalachian Mountain chain. Various ice ages left the area with poor, rocky soil. Limited agricultural prospects and the rugged coast discouraged settlement until the early 19th century, when European came for lumber. The forest industry prospered, as did shipbuilding, but by the 1930's, the rise of steel ships and overcutting of the forest had thoroughly devastated the regional economy. Nevertheless, tourists had discovered the area, and even as the locals were departing for greener pastures, officials were scouring New Brunswick for a national park site. The park was officially opened in July 1950. Perhaps the park's most striking feature is the Bay of Fund itself. Twenty-nine foot tides roll in and out twice a day. The receding tide exposes a diverse array of plant and animal life divided into zones according to preference for air or water. Lobsters, herring, dogfish, sculpins, goosefish, smelt, salmon, as well as pilot whales, porpoises and harbour seal dwell offshore. Large sharks are rare, though in June 1930 nearby fishermen reportedly caught a 37-foot great white shark. Wooded flat-topped hills and steep river valleys characterize the park's interior. The forest contains a wide variety of bird and animal life, including the reclusive eastern cougar. This $1 stamp is the first of a new series of high-value definitive stamps on the theme of our national parks as part Canada's total environment. Ron Bolt, the realist painter who illustrated the stamp, found his inspiration in the abstract rhythms of the landscape and the powerful sweep of the tides, which are the dominant feature of the Bay of Fundy.