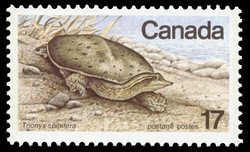 Since life began on earth, species have come and gone. Indeed, mankind has hustled some of them along. The bowhead whale barely survived extinction, and the Canadian population of eastern spiny soft-shelled turtles is now threatened. While widespread in the United States, the soft-shelled turtle barely extends into Canada. Though having deserted the Dundas Marsh and Hamilton Bay, the turtle still dwells in the vicinity of Lakes Erie and St. Clair, western Lake Ontario, the upper St. Lawrence, the Ottawa and the Richelieu Rivers. With such a tenuous foothold in this country, the creature is perhaps especially sensitive to environmental deterioration. The greatest threat to the species thus appears to be toxic chemicals, notably PCB's. The fact that people find the turtle good to eat also jeopardizes its future. The eastern spiny soft-shell has a flat, almost round, leathery shell which inspired the names "pancake" and "flapjack" turtle. In Canada the females, which are larger than the males, generally have a shell length of fourteen inches. The soft-shell spends most of its time in the water, preferring sand bars, places where fallen trees spread their limbs underwater, or shallow waters with soft bottoms and some vegetation. A carnivore, the turtle occasionally hunts from ambush, but more often prowls along the bottom looking for crayfish under rocks and in masses of vegetation. The soft-shell escapes its own pursuers by swimming away at high speed or burying itself. When caught, it struggles violently, clawing viciously and snapping with razor-sharp jaws. The illustration of the soft-shelled turtle is by Gary Low, Toronto artist, whose respect for nature in all its forms is shown in the smallest details of his paintings.