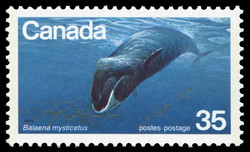 Since life began on earth, species have come and gone. Indeed, mankind has hustled some of them along. The bowhead whale barely survived extinction, and the Canadian population of eastern spiny soft-shelled turtles is now threatened. Bowhead whales today inhabit the eastern and western Arctic, usually staying near the edge of the ice. No longer do the animals visit the Gulf of St. Lawrence during the winter, as they did in their heyday. While a few adult bowheads reach sixty-five feet in lenght, fifty-eight feet is more normal. The colossal head takes up a third of the body Baleen whalebone plates, some fourteen feet long, hang from the upper jaw. These plates filter a tremendous quantity of krill (marine crustaceans) from the water, enough to maintain a layer of blubber eighteen inches thick. The blubber makes the whale so buoyant that some scientists believe that it has trouble diving. The bowhead's commercial advantages nearly caused its extinction. One large specimen yielded one and a half tons of lucrative baleen and twenty-five tons of oil. Also, the whales swam slowly and did not sink when killed. The United Kingdom alone was dispatching two or three hundred whaling ships a year when the hunt for bowheads reached its height. Today, international agreements protect these sociable beasts, and only killer whales and a few Inuit prey on them. Robert Batemen, noted wildlife artist and conservationist has shown the bowhead whale in its preferred habitat: the icy polar seas.