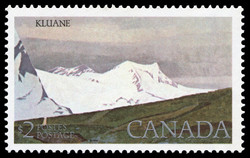 Kluane National Park contains some of the most rugged and stunning terrain anywhere. Even by Canadian standards, the scenery is exceptional. Rock and ice dominate the park. Canada's highest peaks rise out of the world's largest non-polar ice field. Moist air from the Pacific maintains the ice field, which originated during the last ice age and which has given birth to many huge glaciers. These flow down nearby valleys, sometimes covering as much as seven miles in four months. In the sea of snow and ice, huge mountains often resemble angry waves. So forbidding is the landscape, that Mount Logan, the tallest in Canada, remained undiscovered until 1890. Eighty-four years passed before scientists finally satisfied themselves that the peak is 19,520 feet high. Of course, few people want to measure mountains in a place where summer is pitifully short and where, during winter, a thermometer capable of registering -110oF can drop below the bottom of the scale. Thus, only a few mountaineers and scientists visit the area and to achieve their goals they risk falls, frostbite, snow blindness and altitude sickness. At lower altitudes, the park is more hospitable. Plant and animal life thrive. Endangered species, such as the golden eagle, the bald eagle and the peregrine falcon, inhabit the area. There are substantial populations of Dall sheep and grizzly bear Most notable of the local fish is the kokanee, a dwarfed, landlocked variety of the sockeye salmon. The advance of a glacier cut off the creature's access to the sea. Even in the lower part of the park human activity has been minimal. Some scattered relics remain from the gold rush. Limited numbers of contemporary sportsmen, tourists and scientists have made little impact. The park still broods in the splendid isolation of the southwestern Yukon, perhaps wondering what the Alaska Highway will bring next. Artist Alan C. Collier has travelled the length and breadth of Canada, capturing the land in all its variety. The painting on this stamp, "Across the Tundra", is one of several studies done in the wilds of Kluane National Park.

Alan Caswell Collier, "Across the Tundra"