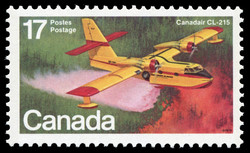 The transportation theme, which began with ships, will continue in a new series of stamps devoted to Canadian aircraft. Flying boats will be featured in the first issue. These water-borne aircraft greatly improved access to lakes and rivers opened up by the canoe. Observing that the World War II aircraft converted into water bombers were growing obsolete, Canadair of Montreal designed and built the CL-215 amphibian. It first flew in 1967 and remains the worlds only aircraft designed specifically for water bombing. The CL-215 has made over 80 drops a day because it can fill its tanks while in motion, skimming across a lake or ocean at speeds of over 100 kilometres an hour, through waves reaching heights of two meters. The amphibians sturdy structure enables it to withstand this sort of treatment as well as the strong thermal currents encountered near fires. The CL-215 has proved itself not only in fire fighting, but lso in pesticide and herbicide spraying, utility transport, patrol flying, aerial survey, and search-and-rescue work. Several overseas governments have purchased the aircraft. Robert Bradford and Jacques Charette collaborated on the design of the flying boat stamps. Mr. Bradford, curator of the Aviation and Space Division of the National Museum of Science and Technology did the paintings of the four aircraft. Ottawa graphic designer Jacques Charette prepared the designs and typography. This 17-cent stamp shows a Canadair CL-215 with the yellow and red finish of the aircraft operated by the province of Quebec.