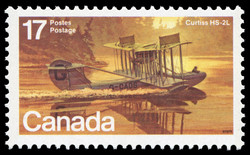 The transportation theme, which began with ships, will continue in a new series of stamps devoted to Canadian aircraft. Flying boats will be featured in the first issue. These water-borne aircraft greatly improved access to lakes and rivers opened up by the canoe. In 1917 the United States created the Curtiss HS-2L as a patrol bomber for antisubmarine work. After the war the Canadian government, the Ontario Provincial Air Service, Laurentide Air Service, and other organizations flew the HS-2L for everything from forest fire patrols and mercy flights to patrols against rumrunners nd opium smugglers. The HS-2L had personality. If the Liberty engine overheated, it spewed scalding radiator water on the crew. This fickle, noisy monster often failed, forcing the flight mechanic to repair it in the air or at remote, bug-infested lakes. With its wooden hull, the HS-2L soaked up gallons of water, reducing its payload significantly because of the excess weight; and it was such a fragile craft that one sank after hitting a whisky bottle in Toronto Harbour. Despite its defects, the Curtiss HS-2L ushered in the era of bush flying in Canada. Robert Bradford and Jacques Charette collaborated on the design of the flying boat stamps. Mr. Bradford, curator of the Aviation and Space Division of the National Museum of Science and Technology did the paintings of the four aircraft. Ottawa graphic designer Jacques Charette prepared the designs and typography. This 17-cent stamp shows a Curtiss HS-2L (G-CAOS) of the Ontario Provincial Air Service.