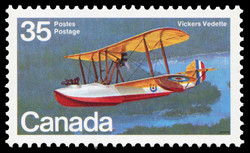 The transportation theme, which began with ships, will continue in a new series of stamps devoted to Canadian aircraft. Flying boats will be featured in the first issue. These water-borne aircraft greatly improved access to lakes and rivers opened up by the canoe. Canadian Vickers Limited built the Vedette, a three-seater flying boat designed for forest-fire patrols and photographic work. The Vedette went through six marks (versions) after the first one flew in 1924. The aircraft boasted a maximum speed of 90 miles an hour, though some pilots claimed it took off at 85 miles an hour, flew at 85 miles an hour and landed at 85 miles an hour. The company exported several of the planes to Chile and a number were purchased by the RCAF, which based them in Manitoba and Saskatchewan. Others served in a coast-to-coast photographic survey. The Vedette starred in a number of spectacular mercy missions, and some airmen even took it up for aerial goose hunting. The Vedette saw service with the RCAF until the beginning of World War II. Robert Bradford and Jacques Charette collaborated on the design of the flying boat stamps. Mr. Bradford, curator of the Aviation and Space Division of the National Museum of Science and Technology did the paintings of the four aircraft. Ottawa graphic designer Jacques Charette prepared the designs and typography. This 35-cent stamp features a Vickers Vedette in the finish and markings of the RCAF before World War II.