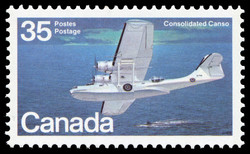 The transportation theme, which began with ships, will continue in a new series of stamps devoted to Canadian aircraft. Flying boats will be featured in the first issue. These water-borne aircraft greatly improved access to lakes and rivers opened up by the canoe. In the early 1930's, the United States Navy issued specifications for a long-range flying boat. Designed by Consolidated Aircraft, it later became known as the Catalina. After the Second World War broke out, the RCAF ordered a large number for antisubmarine duty. These 149 were built as amphibians, according to RCAF specifications, by Boeing at Vancouver and by Canadian Vickers at Montreal. They were called Cansos. The RCAF flew the Canso until 1962 for search and rescue, Arctic survey, and general transport duties. The stamp shows the aircraft in which Flight Lieutenant David Hornell of Mimico, Ontario, won the Victoria Cross. Ignoring concentrated antiaircraft fire on his blazing plane, he attacked a surfaced U-boat and sank it with depth charges. He skilfully crash-landed, but died from exposure in the Atlantic's icy waters. Robert Bradford and Jacques Charette collaborated on the design of the flying boat stamps. Mr. Bradford, curator of the Aviation and Space Division of the National Museum of Science and Technology did the paintings of the four aircraft. Ottawa graphic designer Jacques Charette prepared the designs and typography. This 35-cent stamp features the all-white Canso (9754) flown by Flt. Lt. David Hornell, V.C.