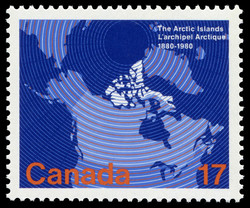 In 1880 Canada acquired Britain's claims to the Arctic Islands. This crowned ten years of national growth which had seen Canada absorb British Columbia, the Hudson's Bay Company territories, and Prince Edward Island. Never before had such a small country gained so much territory so peacefully and so quickly. Britain's explorers had been establishing that country's rights in the Arctic archipelago ever since the sixteenth century. Men such as Frobisher, Hudson, Button, Bylot, Baffin, Fox, Ross, Parry, Franklin, Rae, Penny, McClure, Kennedy. Belcher, and McClintock discovered practically all the land there. Only in the nineteenth century did merican explorers arrive, and only at the end of the century did a Norwegian, Otto Sverdrup, find the Rignes Islands and Axel Heiberg Island. During the 1860's, France and Russia recognized the supremacy of the United States in North America and withdrew from the area. Britain itself quietly began to withdraw after the Anglo-American crisis of 1861. Britain thus promoted Confederation, theorizing that it would reduce the chances of further Anglo-American conflict. In 1870 the imperial government handed a good part of the continental interior over to the new Dominion. Events in 1874 precipitated action on the Arctic Islands. An Englishman enquired about who owned them, and an American requested a land grant there. Officials in London reasoned that "if this Yankee adventurer is informed by the British FO [Foreign Office] that the place indicated is not a portion of H. M. dominions, he would no doubt think himself entitled to hoist the 'Stars and Stripes'..." To mollify the Americans and to prevent them from seizing the islands, Britain offered them to Canada in 1874. Legal arguments about the best way, to make the transfer and a futile attempt to define the regions boundaries caused a delay of six years, but on 1 September 1880, Canada at last took possession. Ironically, Ottawa largely ignored the islands until 1895, when foreign initiatives there forced the government to pay attention to the region and act to establish their claim more firmly. The Arctic Islands stamp was designed by Toronto graphic design firm Gottschalk & Ash. It features a handsome treatment of the map of Canada. The Arctic Islands, to which Canada acquired claim in 1880, are shown in white on the design.