Robert Harris, A Meeting of the School Trustees 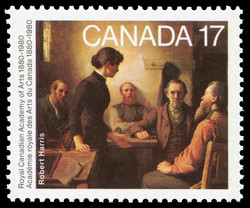 The hidden date for this stamp can be found on the chair in the bottom-right corner of the stamp. The year 1880 proved to be a good year for Canadian art. The Royal Canadian Academy of Arts (a nationwide association of creative artists) and the National Gallery of Canada came into being. In conjunction with the centennial of these events, the Post Office will issue four stamps portraying works created by Academy members and forming part of the collection of the National Gallery. Governor General Dufferin first broached the idea of a Canadian academy of arts. His successor, the Marquis of Lorne, took up the proposal. Difficulties impeded progress. Lorne noted that the project caused "a marvellous amount bitterness and bad language", and that "half the artists are ready just now to choke the other half with their paint brushes". Nevertheless, encouraged by his wife, Princess Louise, Queen Victoria's daughter, he persisted, hoping that the Academy would improve Canadian cultural life by promoting excellence of design, by supporting art schools throughout the country, and by founding a National Gallery at Ottawa. To accomplish the last goal, each person, as a condition of membership in the Academy, donated one of his or her works to the Gallery. Since 1880, academicians have given art now worth approximately $2 000 000 to the institution. Robert Harris (1849-1919) was born in Wales and migrated to Prince Edward Island in 1856 with his parents. He achieved national acclaim after painting "The Fathers of Confederation". His genre painting, "A Meeting of the School Trustees", purchased by the National Gallery in 1886, is featured on one of the 17-cent stamps. Some regard it as the "first work with a feminist theme in Canadian art". Jean Morin Designers, a Montreal firm, is responsible for the graphic design and typography for this stamp issue. For the first time in recent years, a lighter version of the Helvetica typeface in capitals has been used for "Canada".