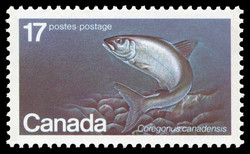 Though Canada has one-quarter of the world's freshwater supply, it has comparatively few species of freshwater fish - a direct result of the last ice age. Factors such as acid rain and other forms of pollution, overfishing, and deforestation threaten at least 14 of these species, one of which is the Atlantic whitefish. Science knows comparatively little about the Atlantic whitefish, as is the case with many Canadian fish. The only place in the world where it can be found is in southern Nova Scotia. Also known as Acadian whitefish, the whitefish, or the Sault whitefish, it inhabits the Tusket River System and Millipsigate Lake - Petite Rivière System. The Atlantic whitefish belongs to the salmon family. Adults range from 150 to 400 mm in length, although a fisherman reported having caught one 431.8 mm long. Specimens found in Yarmouth harbour had eaten amphipods (small crustaceans), periwinkles, and marine worms. The Tusket River whitefish spawn in fresh water, but spend their adult lives in the sea. The young descend to the sea from mid- February to late March, and the spawning run occurs from mid-September to early November. Movement up and down the river, however, is a problem because of a dam built in 1929. There is a fish ladder around the dam, but fish using it have been an easy prey for poachers. Those fish that ignore the ladder and attempt to ascend the sluices are killed by the blades of the dam's turbines. The stamp shows the Atlantic whitefish in its freshwater habitat - the pebbled depths of a cool, clear river. The illustration is by Michael Dumas, a young Ontario artist well known for his wildlife paintings.