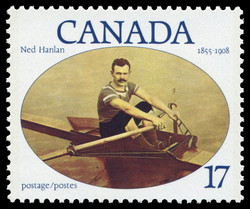 The hidden date for this stamp can be found along the edge of the picture. Just a little over 5'8" and never more than 155 lbs. at his prime, Edward "Ned" Hanlan became the world's premier oarsman and in 1880 the first Canadian ever to win a world championship. He was born in 1855 on Toronto Island and grew up there. In 1873 he won the rowing championship of Toronto Bay and in 1875 the Ontario championship. In 1876 twenty prominent men formed the Hanlan Club, which gave him respectability with the rowing establishment and bought him a better boat and a sliding seat. That same year Hanlan entered the United States Centennial race at Philadelphia. Hanlan won the race and returned home to a hero's welcome. Devotees described him as "unreserved, gracious, kindly, clean, humorous, honest and sporting... with... friendliness and cleanliness of mind." In 1879 Hanlan gained the English championship and in 1880 contested the world championship against Edward Trickett, a 6'4" Australian. Hanlan impressed the crowd of 100,000 with his technique, amused them with his antics, and thrashed Trickett convincingly Unlucky Australian bettors dropped thousands. Hanlan remained world champion until 1884 and died in 1908. The Ned Hanlan stamp was designed by Toronto photographer Clive Webster. Based on a contemporary photograph of Hanlan in his racing shell, the coloration and layout of the design are in keeping with the feeling of late 19th Century hand-tinted photographs.