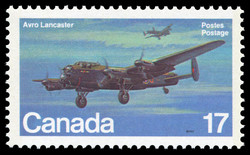 Military flying is the pillar of Canadian aviation. The military gave thousands of young Canadian aviators their start and provided Canadian manufacturers invaluable experience in the design and production of modern aircraft. The Avro Lancaster evolved from the Manchester, an unsuccessful two-engined bomber. The Lancaster first flew on 9 January 1941, and entered combat on 3 March 1942. The airplane eventually flew 156,000 wartime sorties, dropping 608,612 tons of high-explosive bombs and 51,513,106 incendiaries. The twelve R.C.A.F squadrons that flew the Lancaster contributed greatly to these totals. Two Canadians won the Victoria Cross in Lancasters: Andrew Charles Mynarski burned to death trying to save a man trapped in the rear turret; Ian Willoughby Bazalgette completed his mission despite heavy damage to his aircraft... to save two crew members unable to bail out, he crash-landed the machine, but died when it blew up. Victory Aircraft Limited of Malton, Ontario, built 430 Lancasters. The Lancaster served the postwar R.C.A.F in air/sea rescue maritime reconnaissance, and a photo-reconnaissance project that completed the mapping of Canada from the air. Shown on the stamp is Serial No. KB700, the "Ruhr Express", the first Lancaster built in Canada by Victory Aircraft. The aircraft was operated by R.C.A. F Squadron No. 405. "City of Vancouver Squadron". The military aircraft stamps were designed by Robert Bradford and Jacques Charette. Mr. Bradford prepared the paintings that appear in the typographic format designed by Mr. Charette.