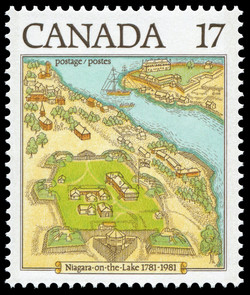 Niagara-on-the-Lake, Ontario, the first capital of Upper Canada, is situated at the mouth of the Niagara River. Colonel John Butler founded the town in 1781, when this famous soldier was then in charge of Fort Niagara on the opposite side of the river. The Loyalists and Indians who had congregated there needed a local food supply, so Butler sent soldiers to begin farming in what is now Niagara-on-the-Lake. Featured on the stamp is a bird's-eye view of the area about 30 years after the town's founding, which shows all the establishments associated with its early history. At the bottom of the design is Fort George, the British defence post; and moving clockwise, Butler's Barracks, used to house Colonel Butler's Rangers; the beginnings of Newark (later renamed Niagara-on-the-Lake); the lighthouse at Mississauga point (later the site of Fort Mississauga); Fort Niagara on the U.S. side of the Niagara River; and beside and to the right of Fort George, Navy Hall, thought to be the location of Upper Canada's first legislature. The stamp was designed by John Mardon of Toronto, who has captured the feeling of an antique perspective map through a combination of line and colour wash.