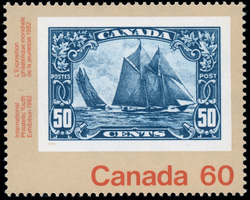 This stamp's date is in the bottom-left corner underneath the stamp image. CANADA 82, the first International Philatelic Youth Exhibition ever held outside Europe, will take place in the Queen Elizabeth Hall at the Canadian National Exhibition grounds in Toronto from 20 to 24 May 1982. Seventeen or more foreign postal administrations have indicated that they will either attend or provide an exhibit. Visitors will view 1,000 or more frames of international class material, and a court of honour will contain portions of world-famous collections. An engraver will be on hand demonstrating the highly intricate skill of stamp engraving. Canada Post Corporation will demonstrate Telepost and Intelpost, the latest technology in the delivery of mail electronically. Canada's National Postal Museum will provide a unique display of stamps from Canada's National Stamp Collection.

Young people have long been interested in stamp collecting. It was a boy who found the only known copy of the famous British Guiana 1-cent magenta of 1856. Philately enables young people to make new friends and to learn more about history, geography, nature, arts and science. To commemorate CANADA 82 and to honour the work of young collectors, Canada Post Corporation will issue the second souvenir sheet in Canada's postal history. The sheet will include the two stamp-on-stamp commemoratives issued on 11 March 1982. These portrayed the Three penny Beaver and the "Mountie" stamp of 1935. The sheet will also include the three stamps - a 30-cent, a 35-cent, and a 60-cent stamp - to be issued on 20 May 1982, in conjunction with the exhibition.

The 60-cent stamp shows the "Bluenose" stamp of 8 January 1929, also part of the Scroll issue. Under the command of Angus Walters, the "Bluenose" dominated its American rivals in a celebrated series of races for the International Fisherman's Trophy. The stamp was designed by the Toronto firm of Gottschalk + Ash Ltd. The image of the engraved classic stamp has been printed in lithography using two special colours. The tagging bars appear in the white margin of the classic stamp image. This feature permits the background colour of the design to extend through the perforations for the first time on Canadian stamps.