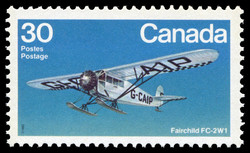 In wilderness transportation, bush aircraft carry out the same work as the canoe. Both are practical devices. Yet an aura of glamour and adventure clings to them. Having improved the aerial camera and found it too sophisticated for existing aircraft, Sherman M. Fairchild, an American, built his own, the FC-1, forerunner of the FC-2W1. Although no FC-2W1's were built in Canada, the almost identical FC-2W2 and Model 71 were. Several FC-2W1's gained fame here. Piloted by Roméo Vachon, G-CAIP flew the first airmail run to Seven Islands and dropped the mail by parachute. In 1928 another FC-2W1, piloted by the "Duke" Schiller, helped rescue some German flyers stranded on the Strait of Belle Isle. The bush aircraft stamps were designed by Robert Bradford and Jacques Charette of Ottawa. The aircraft depicted show the diversity of Canadian bush flying: Roméo Vachon's FC-2W1 delivering airmail; the prototype Beaver, now in the National Aeronautical Collection; the Norseman as an air ambulance; and "Punch" Dickins' Super Universal G-CASK, perhaps the most famous of Canadian bush planes.