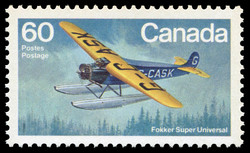 In wilderness transportation, bush aircraft carry out the same work as the canoe. Both are practical devices. Yet an aura of glamour and adventure clings to them. This aircraft evolved from the Fokker Universal designed by Robert Noorduyn. Canadian Vickers Limited of Montreal built about fifteen Super Universals. In 1928 "Punch" Dickins piloted G-CASK, an American-built Super Universal, 3,965 miles in a celebrated aerial exploration of the Barren Grounds. In 1929 another Arctic expedition was forced to abandon G-CASK. When recovered eleven months later, it started with little trouble. Another Super Universal that sank in the Burnside River flew perfectly when salvaged. The bush aircraft stamps were designed by Robert Bradford and Jacques Charette of Ottawa. The aircraft depicted show the diversity of Canadian bush flying: Roméo Vachon's FC-2W1 delivering airmail; the prototype Beaver, now in the National Aeronautical Collection; the Norseman as an air ambulance; and "Punch" Dickins' Super Universal G-CASK, perhaps the most famous of Canadian bush planes.