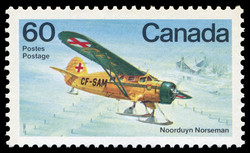 In wilderness transportation, bush aircraft carry out the same work as the canoe. Both are practical devices. Yet an aura of glamour and adventure clings to them. In 1934 Robert Noorduyn, an expatriate Dutchman, arrived in Montreal. There he produced a rugged, high-wing, single-engined monoplane with the ability to take off and land in a short distance with a good load. The plane first flew in 1935. Sales were slow until the Second World War. The RCAF used the Norseman for wireless and navigational training and later for search and rescue. The Saskatchewan Government Air Ambulance Service owned the aircraft depicted on the stamp. The bush aircraft stamps were designed by Robert Bradford and Jacques Charette of Ottawa. The aircraft depicted show the diversity of Canadian bush flying: Roméo Vachon's FC-2W1 delivering airmail; the prototype Beaver, now in the National Aeronautical Collection; the Norseman as an air ambulance; and "Punch" Dickins' Super Universal G-CASK, perhaps the most famous of Canadian bush planes.