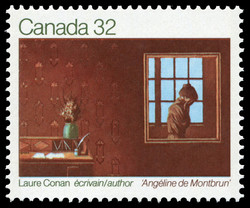 The hidden date for this stamp can be found on the table along the left edge of the stamp. Félicité Angers was born in La Malbaie, Canada East, in 1845. Using the pen name Laure Conan, she became French Canada's first female novelist and the first Canadian to write a psychological novel. Conan attended school at the Ursulines Convent in Quebec City and then returned to La Malbaie, where she remained for most of her life. Conan's first novel appeared in 1878. From June 1881 to August 1882 the novel "Angéline de Montbrun" ran in serial form in "La Revue Canadienne". Many regard it as her best work. A contemporary literary critic praised "Angéline de Montbrun" as a book "the healthy and fortifying reading of which appeals to the mind, feeds the heart, and uplifts the soul...." In later life Conan turned to patriotic and historical themes. She gained international recognition when the Académie française awarded her the Prix Montyon for her novel "L'Oublié." Conan died in 1924. The Conan stamp illustrates her novel "Angéline de Montbrun" and shows Angéline, toward the end of the story, mourning the double tragedy she has suffered. Behind her is reflected a clear blue sky, which symbolizes the carefree life she has renounced. René Milot of Toronto, who is originally from Trois-Rivières, painted the illustration. This se-tenant pair of stamps was designed by Toronto graphic artist William Tibbles.

Based on a painting by René Milot.