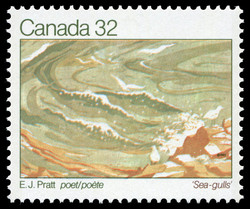 Edwin John Pratt was born in Western Bay, Newfoundland, in 1882. Young Pratt enjoyed reading in his father's large library and listening to sea stories. He attended St. John's Methodist College and then taught and preached at such places as Moretons Harbour, Clarke's Beach, and Bell Island. At length he decided to further his education in Toronto, which he financed by manufacturing and selling a home remedy called "Universal Lung Healer." Pratt joined the English Department at Victoria College, University of Toronto, in 1919, having come to literature via psychology, philosophy, and theology. He had begun to publish his poetry in 1917. His subsequent works gained him a reputation as Canada's foremost poet. Some of his best-known poems dealt with the sea or with Canadian history. Among the latter were « Brébeuf and his Brethren » which told of the Jesuit missions to Huronia, and « Towards the Last Spike », which described the building of the Canadian Pacific Railway. Pratt died in 1964. The Pratt stamp features a multicoloured woodcut, which represents his poem « Sea-gulls ». The woodcut is by Toronto printmaker and poet Claire Pratt, daughter of E.J. Pratt. This se-tenant pair of stamps was designed by Toronto graphic artist William Tibbles.

Based on a wood engraving by Claire Pratt Designed by William H. Tibbles