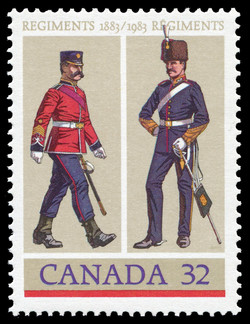 The year 1883 held great significance for Canada's armed forces. The Militia Act, passed that year, for the first time recognized the existence of a professional Canadian army. In addition, two regular units - The Royal Canadian Regiment and The Royal Canadian Dragoons - and two militia units, The Royal Winnipeg Rifles and The British Columbia Regiment - date back to 1883. Canadian military history began with the earliest war between Indians and later with the militia of New France. The military history of Canada as an independent state, however, started in 1871. In 1870 and 1871 the British pulled most of their regular troops out of Canada. This left the young nation to perform its own military functions, such as training the militia and caring for stores and fortifications. A standing army might have done the work, but the public did not want one, fearing it might threaten liberty. In 1871 the government therefore created two "artillery schools" rather than a "standing army." The schools helped militia artillery units maintain their standards, but with no professional instruction of their own, standards dropped in the militia infantry and cavalry units. The Militia Act of 1883 rectified the situation, providing for a professional force not the exceed 750 men. This group was to include three batteries of artillery, one troop of cavalry, and three companies of infantry, which would "serve as practical Schools of Military Instruction...." The Infantry School Corps later evolved into The Royal Canadian Regiment, and the Cavalry School Corps became The Royal Canadian Dragoons. The Royal Winnipeg Rifles and The British Columbia Regiment also originated in 1883, thanks mainly to the initiative of officers in Winnipeg and on the West Coast. It is fortunate that the four units appeared in 1883. Within two years, three of them sent men to engage in the North West Canada Campaign in 1885. The stamps, painted by William Southern of Toronto, feature illustrations of the uniforms worn by the four regiments before the turn of the century. Ralph Tibbles, also of Toronto, designed the stamp format and typography.

Designed by Ralph Tibbles Based on a painting by William Southern