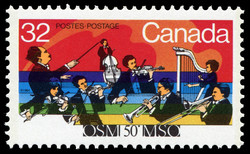 The Montreal Symphony Orchestra, one of the largest principal orchestras in Canada, was founded in 1934 as the "Société des concerts symphoniques de Montréal" and is now known as the "Orchestre symphonique de Montréal". The orchestra was born in the middle of the Depression, thanks to the dynamism of Quebec players, soloists, conductors, and composers who had not been receiving the recognition that they merited. Wilfrid Pelletier, a prominent Quebec conductor who was then working at the Metropolitan Opera in New York, enthusiastically supported the new organization. His determination, his powers of persuasion, and his faith in young musicians and in the future in the world of music in that province. He became the orchestra's first artistic director, from 1935 to 1940. His place was occupied in turn by Désiré Defauw, Otto Klemperer, Igor Markevitch, Zubin Mehta, Franz-Paul Decker, Rafael Frübeck de Burgos, and Charles Dutoit. Over the years, the orchestra has engaged illustrious guest soloists and conductors, reserving a special place for Canadian performers. The orchestra annually commissions works by Canadian composers. Initiatives encouraged by Wilfrid Pelletier, Igor Markevitch, and other artistic directors have rewarded young Canadians musicians for their talent. The Montreal Symphony Orchestra has thus encouraged the interest of Canadians in classical music. To highlight the musicality of this fiftieth anniversary, the stamp design is built on the idea of a musical score. Created by Pierre Kohler of Montreal, with an illustration by Montreal artist Jacques Delisle, it shows typical orchestra members in concert, interspersed like notes among the five-line staff used for musical notation. The First Day Cover features a photograph of Wilfrid Pelletier with the full orchestra at Plateau Hall in 1934. On the first day of issue, the stamp on this First Day Cover will be cancelled with a special die bearing a musical motif.

Based on an illustration by Jacques Delisle Designed by Pierre Kohler