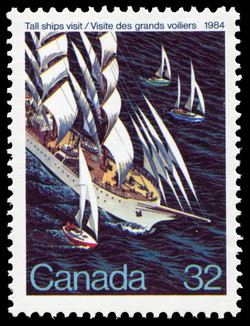 Pomp and circumstance will be Quebec City's daily scene from 25 to 30 June 1984. An estimated one million people will gather to greet a large spectacular procession of tall ships, many of which will have sailed from Saint-Malo, France, to Quebec City. The voyage honours the 450th anniversary of Jacques Cartier's first voyage to North America. On the way from Saint-Malo to Quebec City, the tall ships will visit Las Palmas, Bermuda, Halifax, and Gaspé. Tall ships, the remnants of a great commercial sailing tradition, were given name by the late poet laureate John Masefield who was himself a sailor. Various peoples from ancient times used primitive sailing vessels. Tremendous development took place in the fifteenth century, but it was not until the following century that ships became truly seaworthy. The late nineteenth century became a great era of tall ships when sailing performance reached its peak and designers produced their finest work. Later, interest in tall ships declined as steam-propelled vessels appeared. Nevertheless, many nations now recognize the importance of training under sail, and sailing-ship building has revived in the twentieth century. Tall ships bear the romantic aura of nostalgic tales, but in the age of sail, life on board these ships was very hard. Scurvy took the life of many mariners, and even in the nineteenth century only the fittest survived on board. Lack of fresh water and food, small crews, huge cargoes, and overcrowding of passengers made such trips a gamble between life and death. Nowadays, crews are composed of a large number of people, and radio communications connect ship and shore; but working on board a tall ship is still demanding, as those who visit the ships in Quebec City will quickly realize. The beauty of the tall ships and the seamanship of their crews will be truly worthy of the festivities that Quebec has in store for them. The tall ships stamp was designed by Toronto artist O.K. Schenk. The design features a dramatic aerial view of a Class A square-rigged tall ship typical of those participating in the event. The ship is being escorted into harbour by a collection of small craft. The First Day Cover design features a view of the old harbour basin at Quebec City in the late nineteenth century. Tied up to a wharf is a Norwegian square-rigged ship, typical of those of the last days of merchant sail. The old port of Quebec City is the focus of activities for the 1984 celebrations.