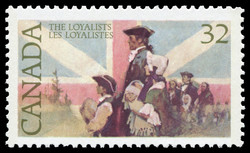 Loyalists were the colonists who remained devoted to Great Britain during the American Revolution. John Adams, a future American president, estimated that about one-third the population of the Thirteen Colonies were Loyalists. At least 20,000 of them joined the army to defend the British cause. These factors turned the Rebellion into a bitter civil war. Histories of the period tell of atrocities on both sides. For example, Revolutionaries tarred and feathered many Loyalists and hanged some as traitors. The took the view that a Loyalist was "a thing whose heads is in England and its body in America, and its neck ought to be stretched." Colonies passed laws disenfranchising Loyalists and confiscating their property. The treaty of 1783, which ended the war, failed to stop these persecutions, so while the majority of Loyalists quietly made their peace with the victorious regime, approximately 100,000 fled. Of these, some 50,000 chose what is now Canada. About 35,000 arrived in the future Maritime Provinces and the rest settled in what became Quebec and Ontario. While a portion of the refugees were merchants, labourers, public office holders, or professionals, most were farmers, an occupation that helped their pioneering efforts here in Canada. Most Loyalists were of British descent, but there were also many Germans, Swiss, and Dutch as well as groups of Quakers, Mennonites, Indians, and Blacks. The Imperial government helped these people get established by giving them food, land, and equipment. Loyalists opened up wide areas of Canada. Their immigration represented the largest influx yet of English-speaking people to Canada. Loyalist pressure led to the creation of New Brunswick and Upper Canada. Thus, the Loyalists, in overcoming personal tragedy, benefited Canada and changed its character. The Loyalist stamp was designed by Toronto illustrator Will Davies. The design features a group of people in costume of the eighteenth century. They are representative cross section of the classes of society of the period who were Loyalists. In the background is the grand union flag, the British flag used from 1606 to 1801.