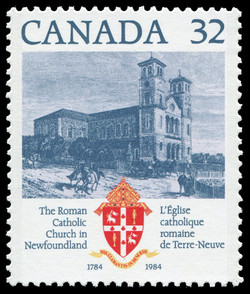 The hidden date for this stamp can be found along the bottom edge of the picture. In 1784 Father James O'Donel, a Franciscan, arrived in Newfoundland. This marked the formal establishment of the English-speaking Roman Catholic Church in Newfoundland and in North America. Roman Catholic priests have arrived in Newfoundland as early as 1627. From then until 1784 the Church experienced difficult times. Britain's anti-Roman Catholic laws applied in Newfoundland because it was a British colony. Moreover, a mixture of English Protestants and Irish Roman Catholics settled the area. The long-standing Anglo-Irish difficulties exacerbated religious tensions. Consequently, priests were subject to arrest and had to operate surreptitiously. The authorities could, and sometimes did, demolish buildings used for Mass, and might fine and deport anyone who allowed his property to be used for the ceremony. Conditions improved in the 1770's. The British passed the Roman Catholic Relief Act of 1778. In addition, the Newfoundland authorities may have hesitated to press anti-Roman Catholic measures for fear that people might follow example of the American Revolutionaries of that era. By 1783 it was possible for a group of merchants to ask an Irish bishop openly to send James O'Donel, a popular Franciscan, to Newfoundland and to give him authority over the island's other Roman Catholic priests. In May 1784, Pope Pius VI decreed Newfoundland a separate ecclesiastical territory, directly subject to Rome rather than to the Bishop of London, as was previously the case. Under Bishop O'Donel's care, the Roman Catholic Church flourished, and in 1795 the Vatican named him the first bishop of the new ecclesiastical territory. He retired in 1807, and left Newfoundland to die in Ireland in 1811. Jean Morin and Robert Ethier of Montreal are responsible for the design, which features the reproduction of an old wood engraving of the Basilica of St. John's, the visible culmination of Bishop O'Donel's work. The arms of the Archdiocese, centred below, bear the motto: "Vox clamantis in deserto" (A voice crying in the wilderness), referring to St. John the Baptist, patron of the church and the city.