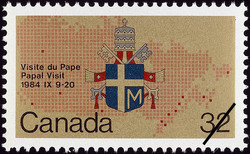 In September 1984, Canada welcomes one of the most famous persons in the world today, Pope John Paul II. Formerly known as Karol Wojtyla, he is the first non-Italian pope since 1523 and the first Polish Cardinal to be elevated to the office. Karol Wojtyla was born in the market town of Wadowice, 50 km from Krakow, on 18 May 1920. His father, a former soldier, brought him up after his mother and his brother Edmund died. Young Karol went to the State school where he soon revealed himself as a brilliant pupil, an athlete, a poet, and an actor. He entered university in 1938, but his studies were interrupted by the outbreak of the Second World War. Karol soon helped to set up a network of underground classes and tutorials, as well as "Studio 39", an underground theatre. During the War, his experience hewing stones in a quarry greatly influenced him as a man and a writer. Although he had been chairman of the Catholic Youth Organization, it was not until after his father's death that he decided to become a priest. Karol Wojtyla was ordained in November 1946 and quickly rose through the clergy, distinguished himself as a theologian, linguist, poet, and philosopher. He set down his beliefs in a number of publications. He made his mark at the Vatican during the synods he attended between 1967 and 1977. On 16 October 1978, the College of Cardinals voted him Supreme Pontiff of the Roman Catholic Church. Since then, the Pope has travelled the world over to spread his message of peace. This set of two stamps is the work of Montreal graphic designer Louis-André Rivard. The concept centres on the Pope's personal coat of arms: a blue shield quartered by a gold cross with the letter M in the lower right-and corner, the whole surmounted by the ancient symbols of the papacy; the triple crown and the keys of St. Peter. The background features a stylized map of Canada, with indications of the stops in the Pope's journey from coast to coast.