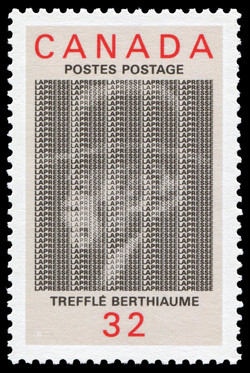 Trefflé Berthiaume, a boy who was bound to succeed, was born on 4 August 1848 in St-Hughes-de-Bagot, Quebec. Having left school at a rather early age for a career as a typesetter, he won a national typesetting competition at the age of twenty-three. A reliable and experienced printer as well as a level-headed businessman, Berthiaume had become the publisher of an illustrated newspaper by 1871. Meanwhile, on 20 October 1884, one W.E. Blumhart founded "La Presse", which he proclaimed was to be "an independent French evening newspaper, devoted to commerce, politics, literature, and above all, news". But by 1889 its uneasy owners had asked Berthiaume to buy out their faltering daily. Blumhart may have founded "La Presse," but Berthiaume certainly rescued it. Right from the start, he put its books back in the black, and by its twenty-fifth anniversary circulation had risen to 100,000. In only a few years, Berthiaume changed the newspaper - he equipped the print shop with the most modern machinery and championed many social causes, including improved conditions for workers and aid to children and the needy. Even after his appointment to the Quebec Legislative Council he continued his lifework, saying that his newspaper was his "second family." He died in 1915, but every day in Montreal there are thousands who still benefit from his "extraordinary toil." The stamp was designed by Pierre-Yves Pelletier of Montreal. Based on a photograph of Berthiaume in his familiar bowler hat, the design renders the tones of the photograph using different weights of letters of the words "La Presse." The words are presented in columns of black type against a newsprint-coloured background, with a red "headline" which further contributes to the newspaper allusion.