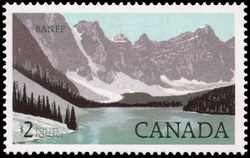 Hoodoos...Kicking Horse Pass...the Columbia Icefield....the Cave and Basin...Lake Louise...the Icefield Parkway...Peyto Lake. These world-famous attractions are found in Banff, the first of Canada's magnificent system of national parks. The mountains in the park were originally deposited over millions of years as sediment on the bottom of a shallow inland sea. Continental drift subsequently jammed on a continent-sized land mass into the west coast of North America. The force of the impact thrust the Rocky Mountains out of the former seabed. Wind, water, and four ice ages then reshaped the mountains. The process continues today, and travelers can still view the remnants of the last ice age in the Columbia Icefield.

Recent research has determined that humans arrived in Banff about 9000 B.C. Kooteney, Assiniboine, and Cree Indians dwelt there in historic times. In 1792, the Hudson's Bay Company fur trader and surveyor, Peter Fidler, was the first European to mention the region. Nothing much changed, however, until 1883, when the CPR passed through on its way west. On 8 November 1883, two railroads workers discovered the Cave and Basin Hot Springs on Sulphur Mountain. That same year, Sir Sandford Fleming and the Reverend George M. Grant had discussed the idea of founding a national park there. In 1885, the federal government reserved the land around the springs "from sale of settlement or squatting" and in 1887 enlarged the reserve, designating it as the "Rocky Mountains Park of Canada." Its future popularity as a health and recreation resort was predicted by Sir John A. Macdonald, who said, "I have no doubt that that will become a great watering-place."

Today, a hundred years after the development of Banff, Canada boasts an unsurpassed system of national parks that will be the pride of the nation for generations to come. Of the many sparkling lakes in Banff National Park, Canadians are perhaps most familiar with Moraine Lake, nestled in the Valley of the Ten Peaks, because of its appearance on the back of the current twenty-dollar bill. The postage stamp features a serigraph of this beautiful lake by printmaker and watercolourist George Weber of Edmonton, Alberta. Typography is by William Tibbles of Toronto.