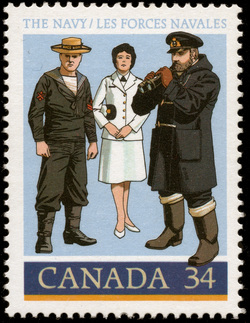 This stamp's date is hidden in the officer's duffel coat. The Royal Canadian Navy was formed in 1910, at the time of the Anglo-German naval arms race. The Canadian parliament looked to the new navy to help preserve "the security of commerce, the safety of the empire, and the peace of the world." In the face of German naval expansion, the Royal Navy began to concentrate its strength in European waters between 1880 and 1906. Gradually, naval duties in Canadian waters had to be taken over by vessels of the Department of Marine and Fisheries. In 1902 Prime Minister Sir Wilfrid Laurier stated his intention of creating a Canadian navy, but not until the Dreadnought crisis of 1906-08 did circumstances favour development of the idea. The British-designed dreadnought battleships had unmatched firepower, but the German navy quickly developed ships of comparable capabilities. It was clear that German would soon equal Britain in this category, and when German dreadnought construction began to outstrip that of Britain, pressure mounted in the Dominions to lend the mother country a hand. The debate in the Canadian Parliament revealed deep divisions of opinion. Some urged a cash donation to allow the British to build more dreadnoughts. Others advocated what their opponents scornfully called a "tin-pot-navy" of small ships like those in the fisheries protection fleet. Another group feared that a Canadian navy would cause Canada to become embroiled, as in the Boer War, with Britain's imperial conflicts. Although these differences would help to defeat the Liberals in the election of 1911, Sir Wilfrid Laurier's government successfully brought in the Naval Service Act. It received royal assent on 4 May 1910, and the Royal Canadian Navy's first warship, the old British cruiser Niobe, entered Halifax Harbour on 21 October 1910.

Designed by Ralph Tibbles Based on an illustration by William Southern