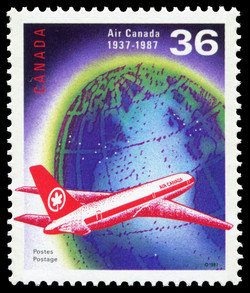 By the late 1920s, Canadians were aware of the need for a transcontinental air service. Otherwise, Canadian intercity air trafficwould merely feed into and out of already existing American routes. During 1933-35, the R.B. Bennett government laid the groundwork for a Canadian route by building a network of aerodromes across the country as a depression relief measure. The actual task of organizing the transcontinental service fell to C.D. Howe, who came to office with the Mackenzie King government in 1935. The government quickly decided that there would be only one Canadian transcontinental airline since it was all the country could support. Several entrepreneurs bid for the government's endorsement and the all-important mail contract. After lengthy and fruitless attempts to bring them together with the CNR and the CPR to form a single, strong airline, Howe created Trans-Canada Airlines (now Air Canada) in 1937 under the sole ownership of the CNR. The new airline's first commercial flight took place on September 1, 1937 between Vancouver and Seattle. Today, Air Canada flies throughout North America, to Europe and beyond to Bombay and Singapore. The stamp design illustrates the extent of the Air Canada network with a stylized version of the globe highlighting some of the airline's many destinations. In the foreground is an Air Canada Boeing 767 banking as if to land. The design is by Derrick Carter of Vancouver and Debbie Adams of Toronto.