Simon Fraser, Returning from the Pacific 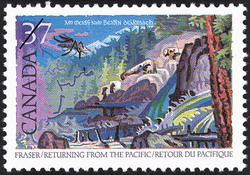 In the 18th century, new scientific equipment allowed explorers to survey land and sea with greater accuracy than ever before. Some of George Vancouver's maps, in fact, are still in use today. As a partner in the North West Company, Fraser led an expedition in 1805 to explore the Upper Peace River and establish trading posts. In 1808, he explored the river that was later to bear his name, though at the time he thought it was the Columbia. He ignored the Indians' warnings about boiling rapids and towering cliffs, and narrowly escaped death in Hell's Gate canyon. Cowichan Indians prevented him from reaching the coast. Artist Frederick Hagan of Newmarket, Ontario painted these four images, third in the series of Exploration stamps. Using a palette of vivid colours, he depicts the lands carted by four 18th century explorers. His imaginative backgrounds detail charts, map-making tools and the Discovery, the ship Vancouver sailed on his voyage around the world.