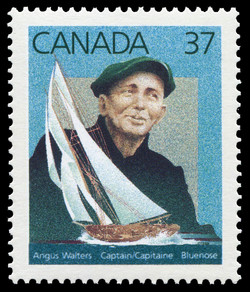 Angus Walters was born in Lunenburg, Nova Scotia in 1882. He began his long association with the sea by sailing and fishing on his father's ship, and then on ships of his own. In 1921, Walters became managing owner of the Bluenose. With this exceptional schooner he won numerous racing events, including in 1938 the International Fisherman's Trophy. In 1933 he sailed the Bluenose to Chicago for the World's Fair, and to England two years later for King George V's Silver Jubilee. After nearly fifty years before the mast, Walters retired from the sea soon after the Bluenose was sold in 1942. He pursued a successful second career as a dairy farmer and died in Lunenburg in 1968. Roger Hill, a Toronto illustrator, has created a fine air-brush paintingof Walters. In the foreground, the Bluenose is seen in spectacular full-sail.