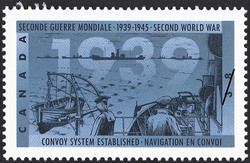 Fifty years ago, Canada made its first independent declaration of war and joined the Allied Forces. Canada Post Corporation begins a new series of commemoratives stamps to recognize Canada's achievements and sacrifices during the Second World War. The first set of four se tenant stamps focuses on significant political or military actions taken by Canada in 1939. The involvement of Canada's army, air force and navy is represented on the stamps. A Souvenir Edition will also be available. Montreal designer Pierre-Yves Pelletier created the stamps using illustrations by Jean-Pierre Armanville, also of Montreal. These stamps focus on how people were affected by the declaration of war and present realistic scenes which evoke memories of the experience of ordinary Canadians during that time period. A background of vignetted metallic colours highlighting the year of war being commemorated is a common feature to appear on these stamps and future issues on the series.