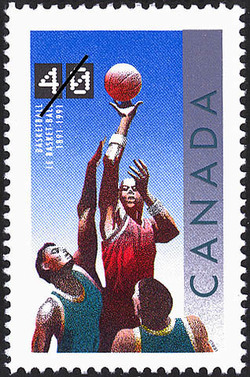 When sports enthusiasts the world over think of Canada, they automatically think of ice hockey, right? Wrong! They should be thinking of the indoor game of basketball, invented by a young Canadian James Naismith in 1891 while teaching at Springfield, Massachusetts. To commemorate this sporting achievement, Canada Post Corporation is issuing a 40-cent stamp and a companion souvenir sheet of three stamps (40¢, 46¢ and 80¢) on October 25, 1991, to mark the 100th anniversary of the game's invention. James Naismith was born in 1861 near Almonte, Ontario and after being orphaned at the age of eight was raised by an uncle and aunt on their farm. After finishing at the local high school, he enrolled at McGill University in Montreal with a vision for a career in the ministry. His dream was enhanced by the realization that "...the only real satisfaction that I would ever derive from life was to help my fellow beings". Naismith was not only a scholar, but an excellent athlete. During his final year at the Presbyterian Theological College, he decided that the latter could benefit mankind as much as preaching. He completed his theological degree, but at the urging of the local YMCA secretary, D.A.Budge, in 1890 he registered at the International Young Men's Christian Association Training School at Springfield, Massachusetts. The next year he was hired to teach psychology, Bible studies and a variety of sporting activities including swimming, boxing, wrestling and fencing. By the summer of 1891 it became apparent to Dr. Luther Gulick, head of the Phys. Ed. department, that his students were lacking a suitable game that could be played indoors during the winter months to replace outdoor team activities such as baseball, football and soccer. Both body building and regular calisthenics were becoming boring, and Gulick assigned Naismith the task of formulating a new indoor activity to eliminate the students' boredom and heighten class morale. Assigned as instructor to the school's most bored, incorrigible and rebellious gym class, Naismith has his work cut out for him. These students had already disposed of two instructors. He tried to adapt outdoor sports into the gym, but all he achieved was "a practical lesson in first aid", due to the roughness. Then Naismith made his breakthrough. Since all team sports used a ball, for indoors the ball must be large but lightweight. Players could throw the ball, but not run with it, tackle, or strike it with a fist. With a plan in mind, he procured two peach baskets and nailed them on to the balcony on either side of the gym. He posted 13 rules and tossed a soccer ball into the midst of two nine-man teams. On December 21, 1891, the game ended in a score of 1-0, but it was resounding success and the game of basketball was born! Canadians have been playing the sport in this country since 1892, having excelled in many Olympics and world championships. Naismith became a doctor and practised at the University of Kansas, where he was renowned as the "inventor of basketball, medical doctor, Presbyterian minister, teetotaller, all-around athlete, non-smoker, and owner of a vocabulary without cuss words. He tossed up the first basketball at the Berlin Olympics in 1936 and died at Lawrence, Kansas in 1939.