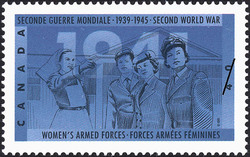 Canada Post Corporation's on-going tribute to heroic achievements and sacrifices of Canadians during World War II continues with a set of four stamps marking 1941, the first year of "Total War". The stamps will be issued on November 8, to complement Remembrance Day ceremonies on the 11th. Canadian women had served as nurses in the Armed Forces since the North-West Rebellion of 1885 and their dedication continued during the Boer War and World War I. In the Second World War, 4439 women were enlisted as "Nursing Sisters". Although women had served in the British Armed Forces since 1938, it wasn't until 1941 that the Canadian Women's Auxiliary Air Force was formed. It was followed by an army corps later that year and a naval service the following years. Beginning as mainly clerks and typists, by the end of the War Canadian women were handling duties as radio operators, armorers, draftsmen, mechanics and welders. Despite receiving lower wages than their male counterpart, more than 50,000 served the cause.