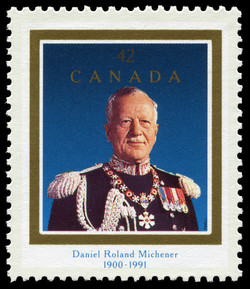 The Order of Canada, centrepiece of the Canadien system of honours, is one of the highest accolades a Canadian may achieve. Two stamps were issued on October 21, 1992 to mark the 25th anniversary of the Order of Canada and to honour its first recipient, the late Right Honourable Roland Michener, P.C., C.C., C.M.M., Q.C., L.L.D., Governor General of Canada from 1967 to 1974. Roland Michener was the first to receive the Order of Canada at a private ceremony with Queen Elizabeth II in England. He was born in Lacombe, Alberta on April 19, 1900 and passed away at his home on August 6, 1991. Born into the prominent family of Senator Edward Michener and his wife Mary Edith Roland, he was educated in Alberta and became a Rhodes scholar at Oxford in England. A practising lawyer from 1924 to 1957, Roland Michener entered politics in 1945. He was a member of the Ontario Legislature from 1945-1948 and served in Cabinet from 1946-1948. He was elected as a Progressive Conservative to the House of Common in 1953 and was Speaker from 1957 until his electoral defeat in 1962. His old friend, Liberal Prime Minister Lester B. Pearson, appointed him High Commissioner to India in 1964 and Ambassador to Nepal in 1965. Upon the death of Georges Vanier in 1967, he was named Governor General of Canada to preside over the various State Visits and celebrations held during Centennial year. Many Canadians will fondly remember his as a fitness devotee, whom the Alberta Blood Indians named "Running Antelope". Michener was also an avid stamp collector. And although he sat on the Boards of 26 companies, received 11 Honourary university degrees and 26 Honourary memberships, he always considered the Order of Canada as his most prestigious award. The Order of Canada was established on July 1, 1967 to honour outstanding Canadians, such as Roland Michener, who exemplify high quality of citizenship and whose personal achievements and contributions have enriched society as a whole.

Designed by Tania Craan Based on a photograph by Artin Cavouk